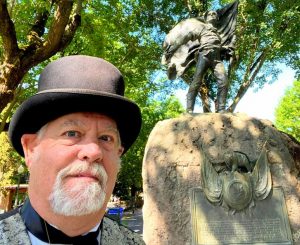 RADIO THEATRE OF THE WILD WEST is one of the oldest shows on KSVY Sonoma 91.3 FM and has been produced continuously since September 2004.
The 478th episode of RADIO THEATRE OF THE WILD WEST aired live on KSVY’s airwaves Sunday, December 12th, 2021—a fantastic accomplishment!
All along, these dusty varmints just keep getting more interesting even after all these years later. The program is hosted by Sonoma locals: George Webber, Butch Engle, and CW Bayer. These three voice-over actors adopt the alter-egos of Wild West Willie, Rattlesnake Dan, and Virginny for an hour of western hijinks, tuneful songs, and original scripted western melodramas in a show-within-a-show called “Sittin’ by the Fire.” This long-running serial tells the story of Bear Claw Bob and Old Cougar Face, who find gold and so much more in a canyon of the Yuba in 1848.

What a Bunch of Characters!

Besides Wild West Willie, Rattlesnake, and Virginny, many other characters arrive at the various saloons, prairies, open trails, and other scenes these talented actors evoke.  Mark Twain, General Vallejo, Captain John Charles Fremont, Count Agoston Haraszthy, and Charles Krug are just a few folks who join the band, not to mention some ladies too, expertly imbibed by the empathic performers.  Other returning characters are Miss Peggy, the Reverend, Jerry Glad Hand, Murderin’ Mike, the Coyote Kid, and Clara the Dry Goods Lady. Visitors to Rich Bar have included Queen Victoria, William Tecumseh Sherman, Joaquin Murietta, Lotta Crabtree, and Lola Montez. Butch Engle is the writer of the feature: “The Lawmen of Cripple Creek” with Sheriff Robert Amos Buckwalter and his Deputy Jake Farmer. Radio Theatre of the Wild West also features interviews with local history legends.

The show is George Webber’s creation, and he has expertly cast his supporting crew. Their rapport is natural, intriguing, and energizing. Geroge is a Historian, actor, professional character portrayal speaker, and History Tour operator. He also owns and operates the Sonoma Walking Tour and the Napa Walking Tour. Many also may know him from professional performances as Mark Twain, Charles Krug, Count Haraszthy, Professor Vine, Luigi, the Singing Italian Chef, and General Vallejo, to name a few.
Butch Engle has been the Artistic Director and Founding member of Sonoma Readers’ Theatre since 1999 and is a professional actor. He has directed or performed in many plays and projects throughout the Sonoma Valley. Lately, he can be heard as the voice of Lucifer in the E.A. game of “Dante’s Inferno” and as Rosie in The San Francisco 49er commercial.
CW Bayer is a musician, author, and historian in his own right. He can be found playing music in the town of Sonoma at Murphys Pub, Palooza, the Speakeasy, the Olde Sonoma Public House, and, when it’s warm, the Plaza. Find C.W. in Sebastopol, Fridays noon, at Cafe And Moore. You may have seen C.W. in the Plaza with his old-time five-string banjo. Other times he’s singing old honky tonk swing songs. Perfect for bankruptcies, wakes, and garage sales. Hear him Sunday nights at 6pm on KSVY during the Radio Theater Of The Wild West. We’ll talk to C.W. Tuesday at (time).
Tune into the most original show on your dial; Sunday nights at 6pm belong to Radio Theatre of the Wild West!

Up Next: French Touch | Michel Saga