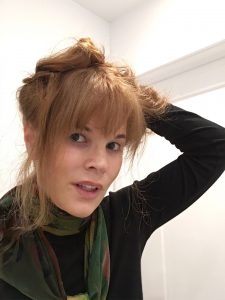 Sonoma's KSVY 91.3 FM has unveiled the production of a new Alternative Rock Program airing every Sunday from 4pm-5pm. Hosted by local former rock drummer Anne Hare, going by “C” on air, the program will explore some of the latest rock and blues music like The Revivalists, Marc Brussard, and Shawn James as well as familiar favorites like The Foo Fighters, The Killers, and Green Day. Anne Hare is an impassioned music fan and concert attendee who shares thousands of new alternative and rock songs on her show.

Retiring from her corporate job in the city to raise her daughter, “C” found her passion for alternative music. Through accompanying her daughter to drum lessons throughout middle school, and excited by the idea of one day having her very own instruments to bang on the percussion with, Anne Hare found her passion for alternative music. Her first ever concert was The Rolling Stones, and her first alternative concert was Train.

Inspired by both the sheer vastness of modern alternative music and her aversion to the repetitiveness of classic rock,  “C” created her program to embrace all types of alternative music. From political rock groups like Green Day, to emo punk bands like My Chemical Romance, “C” covers numerous sub genres on her show, depicting a variety of music. A variety so large, in fact, that she previews over three hundred new songs a month. After navigating through thousands of songs and artists, “C” choses around six thousand songs that get added to a playlist that she draws from for each show. After meticulously selecting the soundtrack for the show, Hare shuffles through the songs checking them for words and phrasing that could potentially violate the broadcast standards for community radio. After the show, “C” posts Spotify playlists to chronicle each show, allowing for the listeners to interact with her content long after the program has aired.  Her program is divided into three secions showcasing bluse-y music, new releases, and her feel good classics. KSVY is glad to welcome Anne Hare, now known as “C”.

DONATE
We use cookies on our website to give you the most relevant experience by remembering your preferences and repeat visits. By clicking “Accept All”, you consent to the use of ALL the cookies. However, you may visit "Cookie Settings" to provide a controlled consent.
Cookie SettingsAccept All
Manage consent