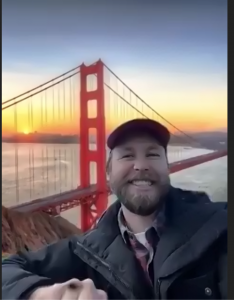 Like so many hosts who volunteer and produce programming at KSVY Sonoma 91.3 FM, Francisco has a romance with the airwaves and an appreciation of the magic of radio broadcasting, especially community radio.

Francisco grew up traversing the west, riding shotgun on long car trips with his Father. His Dad published a travel guide titled "Ranch Vacations," and reconnaissance was necessary to deliver a factual guide based on first-hand accounts. Along the many journeys, the car radio was a faithful companion. Francisco shares fond memories of these formative years, memories weaved together by western skylines and the satisfaction of a radio tuning in, from static noise to clear sound.

Killgore conducts thoughtful interviews with interesting local and regional figures, weekly Tuesday 4 PM - 5 PM on his show, Hello Sonoma! The show first aired in March of 2021 and began with a stalwart of valley theater, Kate Kennedy and her Avalon Players. Since then, the young host and community journalist have conducted over 50 interviews.

Francisco describes the show's spirit as optimistic, inquisitive, and all about connecting through storytelling. He writes, "At Hello Sonoma!, we believe that everyone has a fascinating story if you ask the right questions, and that's just what we aim to do. The show revolves around interviews with interesting people in Sonoma and around the world. Our mission is to build bridges between people by showcasing their stories, life paths, and contributions to the community. We'll have guests from throughout the valley, as well as additional voices from around the world."

Francisco is a proud and long-time Sonoman, returning to town at the beginning of 2020, just before the Covid-19 Pandemic. Born in Tahoe, the 27-year-old came to town in 1997, when his parents moved to town. He graduated from George Washington University in Washington D.C. with a degree in Anthropology and a minor in music. While completing some undergraduate studies at McCallister University in Minnesota, he produced his first two radio programs, two late-night music shows called "Francisco from San Francisco."

When he does not track down subjects to interview, have great conversations, or create unique local radio, he works full-time as the associate director of Sonoma Overnight Support. The local nonprofit's mission is to shelter the homeless and feed the hungry in Sonoma and Sonoma Valley. He also serves on the board for The Sonoma Sister Cities Association. In his off time, you might cross paths with him and his Australian Shepard, "Lucky," as they explore local parks and trails or at his favorite place to grab a bite, Sonoma Eats, out on Hwy12.

And tune in Tuesday, March 8th, which features an interview with Rosie Lee and Barbara Hall from Readers' Books. They share about their own affinity for literature and their lives before the bookstore. Rosie specializes in Children's books, while Barbara heads the social media and Local Authors' sections. Given the current climate about Ukraine, the episode will also feature a few stories from Sonoma exchange students who spent some time in Ukraine in the late 80s and early 90s.

After two years on the air at Sonoma's only community radio station and numerous interviews, Francisco says he learned a tremendous amount about this town and what binds a community together.

Thanks to Francisco, on behalf of the community and all of us at KSVY, keep the conversation going and weaving our story together.

DONATE
We use cookies on our website to give you the most relevant experience by remembering your preferences and repeat visits. By clicking “Accept All”, you consent to the use of ALL the cookies. However, you may visit "Cookie Settings" to provide a controlled consent.
Cookie SettingsAccept All
Manage consent