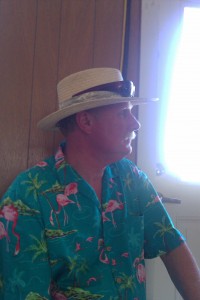 The show came about because of my long-standing interest in radio that goes back to the late sixties. I would listen to all of the many rock stations to decide where I could spend my cash on interesting records. In those days, FM stations would have huge libraries of vinyl from most rock artists of the day that could span 15 years' worth of material and thousands of records. I always had a preference for English rock groups. I was going to live shows at The Fillmore West, Winterland, The Family Dog, The Kabuki Theatre, The Old Waldorf, The Stone, Pepperland in San Rafael, and even Wolfgang’s in North Beach.

To me, it was something like going to the circus, and what really gave me a jolt was a really cool guitarist!! And like the circus, a lot of these guys seemed like they could damn-near eat fire!!!

People often ask me if I play guitar. Well, no, I don't, but I do have enough smokin’ recordings to get my shred-jones out of my system. When KSVY came to town, my friend Jimmy "Boom Boom" Gonzales urged me repeatedly to get out of my living room …where he had experienced many audio assaults in the past …and go talk to the station. I looked at the volume of material that I could supply.

MR. P'S ROCK & ROLL RIOT was then proposed to the station’s manager, et voila! If you enjoy the sort of fast-paced hard rocking sounds of …here comes another laundry list …Ted Nugent, Pat Travers, Robin Trower, Jeff Beck, Ritchie Blackmore, Jimi, Michael Schenker, Rory Gallagher and various odd R&R picks that venture into some Blues, Soul, and Rockabilly, you will most definitely want to tune in. I search through my stacks of stuff each week to find all kinds of different things to play, and I really try to pick tracks that you will almost never hear on big market radio, including satellite. I promise you that every time, it’s a real rockin’ riot!

This website uses cookies to improve your experience while you navigate through the website. Out of these, the cookies that are categorized as necessary are stored on your browser as they are essential for the working of basic functionalities of the website. We also use third-party cookies that help us analyze and understand how you use this website. These cookies will be stored in your browser only with your consent. You also have the option to opt-out of these cookies. But opting out of some of these cookies may affect your browsing experience.
Necessary Always Enabled
Necessary cookies are absolutely essential for the website to function properly. These cookies ensure basic functionalities and security features of the website, anonymously.
Functional
Functional cookies help to perform certain functionalities like sharing the content of the website on social media platforms, collect feedbacks, and other third-party features.
Performance
Performance cookies are used to understand and analyze the key performance indexes of the website which helps in delivering a better user experience for the visitors.
Analytics
Analytical cookies are used to understand how visitors interact with the website. These cookies help provide information on metrics the number of visitors, bounce rate, traffic source, etc.
Advertisement
Advertisement cookies are used to provide visitors with relevant ads and marketing campaigns. These cookies track visitors across websites and collect information to provide customized ads.
Others
Other uncategorized cookies are those that are being analyzed and have not been classified into a category as yet.
SAVE & ACCEPT
Up Next: Mid Morning Smooth Jazz | David Ewing