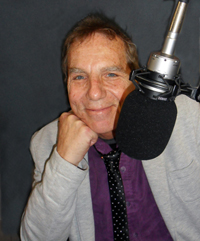 BILL STALLINGS has been in broadcasting since he graduated from Kent State University in Ohio in 1972. He became a local legend when he joined WWWM 105, the first “classic rock” station in the country. After M105 was sold and changed format in 1982, Bill moved to the West Coast and had radio gigs in San Francisco and Sacramento, while doing voice-overs at Cox Productions and teaching radio industry basics at a Broadcasting school in Sacramento. Returning to Cleveland, he landed a morning drive slot at the new “Classic Rock” station WNCX 98.5, but the corporate monopoly of stations and homogenized computerized format had him on the move once again. After a stint as field announcer for the Chicago White Sox A team and commercial voice/announcer for WSRF in Florida, he returned to Cleveland in 1993 and landed an on-air/production job at WMMS FM which became Clear Channel Communications Inc. Bill authored a rock radio format for satellite and syndication: the “RoxFiles: Through Music We Feel”, his real passion. RoxFiles is a theme-oriented fusion of classic FM programming, with innovative, timeless, and entertaining music features, presented in a coherent, meaningful and vivid way, with flow, balance, variety and dynamics, creating adventure with audience participation, always fresh with "New" music releases and topicality of the day by using the entire spectrum of rock and roll. In 2011, he started producing his radio show called RoxFiles. Roxfilesradio.com “The Alchemy of Persuasion”, is his main career focus with unlimited goals to achieve.

This website uses cookies to improve your experience while you navigate through the website. Out of these, the cookies that are categorized as necessary are stored on your browser as they are essential for the working of basic functionalities of the website. We also use third-party cookies that help us analyze and understand how you use this website. These cookies will be stored in your browser only with your consent. You also have the option to opt-out of these cookies. But opting out of some of these cookies may affect your browsing experience.
Necessary Always Enabled
Necessary cookies are absolutely essential for the website to function properly. These cookies ensure basic functionalities and security features of the website, anonymously.
Functional
Functional cookies help to perform certain functionalities like sharing the content of the website on social media platforms, collect feedbacks, and other third-party features.
Performance
Performance cookies are used to understand and analyze the key performance indexes of the website which helps in delivering a better user experience for the visitors.
Analytics
Analytical cookies are used to understand how visitors interact with the website. These cookies help provide information on metrics the number of visitors, bounce rate, traffic source, etc.
Advertisement
Advertisement cookies are used to provide visitors with relevant ads and marketing campaigns. These cookies track visitors across websites and collect information to provide customized ads.
Others
Other uncategorized cookies are those that are being analyzed and have not been classified into a category as yet.
SAVE & ACCEPT
On Air: Films, Facts & Soundtracks | James Domizio

Up Next: The Kitchen Sink | SoothSlinger